An iso image refers to a CD, DVD or Blu-ray image file with an extension of “.iso”, which is composed of the data contents of every written sector of an optical disc, including the optical disc file system. If you want to play Blu-ray iso file on your Mac OS X 10.8 Mountain Lion with the gorgeous LED-backlit 21.5-or 27-inch display or stunning Retina display, either iMac or MacBook, it will be not as simple as inserting a DVD into Mac and then waiting for Mac to play movies automatically.

So how to play Blu-ray iso file on Mac OS X Mountain Lion? This tutorial will show you the detailed operation step by step.

Double-click the Blu-ray iso image file you want to play, which will create a folder containing the iso file on your desktop.

Click “Open Disc” to load the Blu-ray iso image file in the folder. 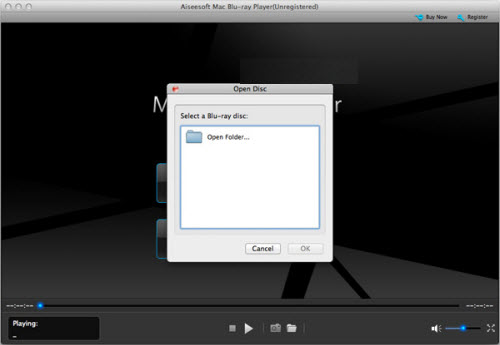 After that, you will see a menu list containing Play Movie, Chapter, Audio, Subtitle and Other Titles. You can choose “Play Movie” to play the main movie directly on OS X 10.8 Mountain Lion.