Windows 10 is an entirely new version of the veteran Windows operating system by Microsoft. The latest Windows 10 system, is no longer just an operating system for 32-bit and 64-bit PCs, but also run on the ARM platform for smaller tablets and smartphones.

VLC is a free and open source cross-platform multimedia player and framework that plays most multimedia files as well as DVDs, Audio CDs, VCDs, and various streaming protocols. The 2.0 and later version of VLC Media Player support Blu-ray media playback with some extra operations. You can download the latest version from VLC official website.

However, for legal reasons, AACS and BD+ DRM libraries and keys still are not shipped. That means only Blu-ray disc with AACS libraries exposed are supported. Below I will introduce the guide referred from VLC’s forum.

How to Play Blu-ray with VLC Media Player for Free on Windows 10?

Step 1: Go to videolan.org, download, install and run the latest version of VLC for your system.

* Open “AppData” directory or create a folder and name it aacs

* Place the downloaded KEYDB.cfg file in this folder directly.

Download Install AACS dynamic library for VLC to use:

* Navigate to “VLC” directory, and move the libaacs.dll file into it.

Now, you can easily play Blu-Ray disc with VLC on Windows for free. Note: The latest VLC still doesn’t have menu support yet.

Tip: VLC does not yet support Blu-ray menus so you must manually select title to play. Not all Blu-ray movies are supported. VLC can only deal with discs which its library has the corresponding AACS keys. However, for legal reasons, AACS and BD+ DRM libraries and keys still are not shipped. In case there are a lot of unsolved problems that you are experiencing every now and again when it comes to playing Blu-ray with VLC, there are better options that you can adopt so that you can continue to enjoy your Blu-ray videos. One of these alternative methods is that you can get a Blu-ray Player for Windows 10(Only $45 for Lifetime) to play Blu-ray disc, Blu-ray folder, Blu-ray ISO on Windows 10 directly with Blu-ray effect. Or you can hire a Blu-ray Ripper for Windows 10(Only $59 for Lifetime) to rip and transcode Blu-ray discs to WMV/AVI/MPG/MPEG/MOV/MKV/MP4 etc for playing on Windows 10 PC or multimedia players. 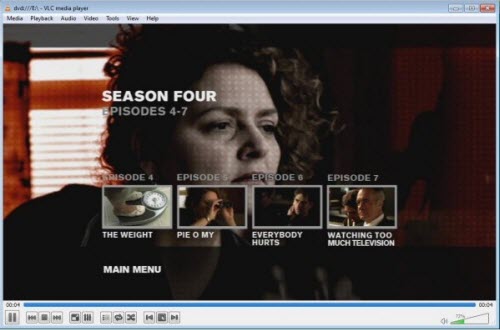