Apple announced the release of two new iPhones (iPhone 5C, iPhone 5S) at a live event in Cupertino, California. The iPhone 5C which has been described as the “budget” model despite a starting price of $A739, and the high-end iPhone 5S which has a fingerprint scanner built in to the home button. Apple CEO Tim Cook called the iPhone 5S “the most advanced iPhone ever with our most forward thinking technologies”. Both the iPhone 5C and the iPhone 5S have the same screen size as the current iPhone 5. They both also have a 8 megapixel camera.The iPhone 5S runs on the new A7 chip. Apple’s Senior Vice President of Worldwide Marketing Philip Schiller said the 64-bit chip was the “first ever in a phone of any kind”. And these iPhone 5c/iPhone 5s is also a great media player which supports a lot of media formats including files with MP4, MOV and M4V as video format and AAC, MP3, Apple Lossless, AIFF, and WAV as audio format. Now if you have already had lots of Blu-ray or DVD movies, you can rip or convert your Blu-ray or DVD collections to store on iPhone 5c/iPhone 5s, then you can take it everywhere for playing.

Step-by-step guide: How to rip or convert Blu-Ray movie to iPhone 5c/iPhone 5s.

Step 1. Load Blu-ray movie to the Blu-ray to iPhone 5c/iPhone 5s Converter.
Insert the Blu-ray disc to Blu-ray-Rom as the source file. Click the Load BD/DVDbutton to load the entire Blu-ray disc.

If you have backup the entire Blu-ray disc on hard drive with BDMV file structure, you can also click BD/DVD Folder button to load the BDMV folder. 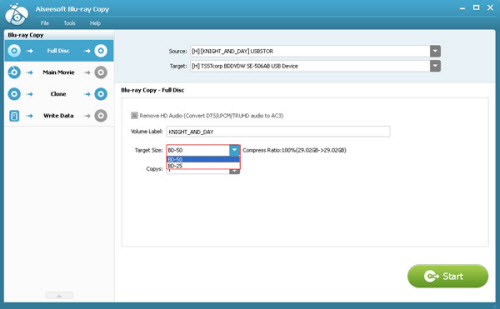